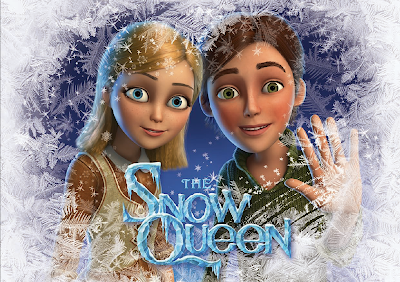 Right now, there has to be some type of computer animation feature release every month. If people like myself complain about the glut of superhero movies, they have nothing on this subgenre in film right now. It’s to the point where we even have our own Olympus Has Fallen vs. White House Down battle this fall with Frozen and this animated Russian film The Snow Queen. Both are based on the fairy tale the Snow Queen and both put a spin on the typical story that we know. The Snow Queen was released in Russia last year, but finally hits theaters stateside this fall.

The Snow Queen is about an evil queen with Ice Magic, who has defeated all of the Wizards standing in her way and has frozen the world. The last Wizard and his wife have two children who they send away so they don’t fall into the Queen’s hands. Then the movie fast-forwards in time to a boy and girl who live in an Oliver Twist-style orphanage. The Snow Queen sends a Troll, Orm, to find the son, who is an artist, but they don’t know about the daughter. And, from the beginning, it’s problematic. The movie starts out with terrible narration from the Troll character Orm. Most of the characters’ names are pretty forgettable. I tend to be pretty picky and hard on CG-animated films, probably because I have a background in art and know more about what goes into this process. But, this movie is probably one of the worst-made computer-animated movies I’ve seen in ages. The lighting is quite poor, along with the character design and modeling. The whole thing looks like cut scenes from PlayStation 1 games in 1995.  The voice acting in this movie is also pretty bad; there is barely any emotion in the performances. At times it even seems that lip-syncing is off during this production. The story also seems so unfocused, and it’s hard to care for the characters. The journey the heroine goes through, during which she meets all these characters that don’t really drive the plot nor help her achieve her goal, seems dragged-out and overly long. The villain the Snow Queen is quite boring in her characterization, too; it’s not really explored why she wants to freeze the world. Well, there is one, but it’s not really sold well.
This movie is such a mess, and is clearly a cash grab because Frozen is coming out from Disney this winter. It’s like when Transmorphers came out on DVD right when Bay’s Transformers came out. The only good thing in this movie is that the final message in the movie is a good one for people. That violence doesn’t really solve problems, but it would just be great if it were in a better-made movie. This really isn’t something you should sit through or get for your kids. You be much better served by reading the fairy tale than giving this any bit of your time.