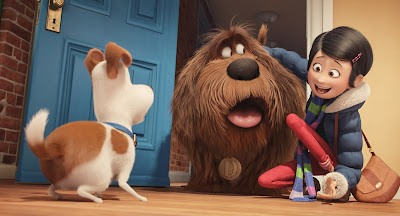 I was wondering what would Illumination do besides something with Minions? That was my main thoughts and then I heard about The Secret Life of Pets and as an interesting idea, it didn’t grab me. It came off as kind of like a Toy Story like story but with Pets instead of toys. Instead, I got to see a very surprising and amazing animated film that is easily one of the best of the year.

The Secret Life of Pets tells the story of a dog named Max who lives in Manhattan with his owner Katie. He loves Katie very much but wonders where she goes during the day when she leaves him. While missing her he usually hangs out with the other pets in the apartment building throughout the day. One evening Katie brings home another dog by the name of Duke, who’s giant and sloppy and totally changing the dynamic in the household. Max doesn’t like that and is jealous. In an attempt to get rid of each other Max and Duke end up in an adventure through New York city to get back home to Katie before she returns.

The one really surprising thing here is just how overwhelmingly funny this movie is. Now Illumination Entertainment had a pretty decent track record with Despicable Me, it’s sequel and Minions but they were all within that same world and overall story. Their ability to take some from a very relatable setting, people and their pets and turn it into such a humorous tale. All the voice acting is stellar with Max being voiced by Louis C.K. and Duke voiced by Eric Stonestreet (Cam in Modern Family) and Kevin Hart as Snowball the rabbit really take this movie to the top. They pack so much character and life into each part of their performance that it feels like the story is just flying by while you’re totally entrenched. On a technical level the folks at Illumination have really taken it up another notch. While the character designs here have the feeling of an Illumination project it has subtle changes so that it’s not just the same as Despicable Me universe movie. The texturing and lighting in this picture is warm and dense. The pets all look different and fur is fantastic. The city looks alive and bright and doesn’t look like they just tried to copy NYC but to craft it in through their eyes for this world they were building.
The Secret Life of Pets is one of the most enjoyable movie experiences I had in 2016 to date. Illumination really has grown into a fantastic animated movie studio that has surpassed DreamWorks and Blue Sky in my opinion to be only second to Disney/Pixar. This a movie that is great for everyone to go see and have a great time.