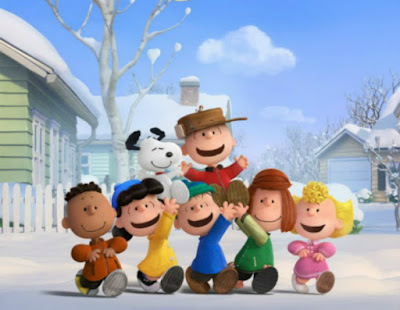 I’ll be honest from the start I didn’t love this new Peanuts film from Blue Sky Studios that was released today. I’m not going to go on for words upon words with trashing it but there is something that didn’t sit right with me while I was watching it.  It might be because I’m getting old or that I’ve learned too much about Charles Schulz and the history of Peanuts but it just didn’t blow me away. The fine folks at Blue Sky and the Schulz family sure did work their hearts out on this movie and the people I was around seemed happy, especially the toddler that was using me as a leg rest (but that’s another story). So what did bug me about?

The Peanuts Movie is basically an encapsulation of what we know the best about the Peanuts comics strips all put together in a cohesive story. It starts in the winter with Good Old Charlie Brown on a mission to fly his kite as usual and the usual outcome happens as we’re also introduced to the familiar gang of characters. The main challenge for Charlie Brown is, of course, to talk to the little red haired girl of legend, but he can’t so his faithful pet Snoopy is always finding ways to help overcome his anxiety. At the same time Charlie Brown’s problem also end up inspiring Snoopy to write this tale of a pilot facing off against the deadly Red Baron of World War I. As per usual Charlie Brown has bad luck, gets hated on by Lucy and others, chills with Linus but always does the right thing.

I think what bothered me about is that unlike the classic TV specials it really didn’t feel like it had anything to say about our culture. That’s something that the classic strip era comics of the ’60s to about the mid ’70s did well. It’s also something the animated specials did excellently. For me it also felt like there was too much Snoopy in the movie. Now I know people love Snoopy and that my childhood era is the point in which Snoopy completely took over the strip but there was just something that didn’t sit right with me. It was far more than a B plot it was essentially a co-plot of the movie. The other weird thing that took me aback was seeing the little red haired girl. She has always been a character never completely seen, more than the adults but still she was someone Charlie Brown was always aspiring to meet There was a mystery and wonder in that and now I feel that is gone to a degree because of the movie.

Now to stopping being Charlie Brown for a bit I did love the way the movie looked a lot. The art direction was really smartly done as they clearly tried to merge the drawing style of Schulz with the feeling of the old animated specials (which also looked like the strip, I know) along with the nature of CG animation with things like textures in the hair and objects. There were also great uses of 2D animation within the film for daysdreams and stray thoughts.  I loved how they chose to have them drawn out on screen like Charles Schulz was drawing Charlie Brown’s wishes as he dreamed them. They also really did well visualizing the sound effects around the characters as they ran and fell and did all the other stuff  we’ve seen them do over the last 60+ years.

In the end I didn’t hate the movie at all. I thought it was quite good actually. I think it’s a great release now coming into the holiday season. It’s a great remix/cover song of what Peanuts is to me and since I been through it all before many times over I guess I’m just kind of bored with what they did. I laughed at parts like the Kite eating tree and Snoopy singing or dressing as Joe Cool but I just don’t think it’s something that is going to be considered a classic. In the end maybe I shouldn’t have hoped for them make a classic without Sparky around anyway.