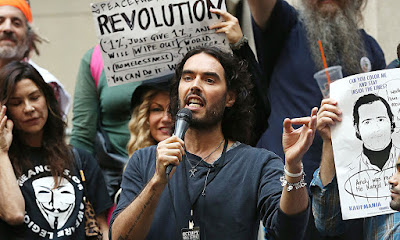 Have you the trill believers ever seen Russell Brand’s The Trews? If not it’s Russell Brand basically commenting on media and issues. It’s Brand talking about things in his own unique way since in a lot of ways he’s publicly transformed into a voice for the “99%” post-marriage to Katy Perry. That’s not to disparage his views and current public self to go from party guy to funny guy who talks about the issues is interesting. His web series The Trews is very much a forebearer to this film The Emperor’s New Clothes. In his web series at times something serious might pop up in the news and Brand takes the time to give his reasoned opinion on it with humor, making it plain for the people viewing it. Quite honestly that’s what you expect from a good standup comedian. So this film of his he made with filmmaker Michael Winterbottom is like going from a quick statement on an issue to a whole essay on a matter. This matter is economic inequality facing the world but very specifically in the United Kingdom.

I think this is subject that is explored and talked about a lot here in the United States but we usually only focus on ourselves or what affects us directly. This film, while dealing with a subject we know well (hopefully) shows that it’s happening and being dealt with in other countries, even our close allies. Let’s be honest the most people know about the UK is their accents, the Royals and BBC TV shows. Brand’s film follows his exploration on how nothing has really changed since the 2008 recession and the bank bailouts that happened there just as they did here. He wonders aloud how these people never were charged and how they got to continue the ways that got us all here in the first place. The film also has segments of him trying to talk to these people and getting stopped because of these big public exhibitions. Some of the best parts of the film are Brand explaining how things work with young school children and asking them if they think it’s fair. It really contrasts what we teach children on how to behave, but then as they age completely disregard as those lessons essentially become a lie.

To be honest there is not a lot of great camera work here. This isn’t a documentary where you’re going to see how the form is pushed. This is something to watch if you’re interest or you like Russell Brand and his shtick. It does work fine for a good Sunday afternoon streaming watch, though. That being said it does a great job of making a case that things have gone too far in one direction and it is also a movie that more Americans should watch. To see other people going through similar situation as the ones here. Some will probably counter with how is this celebrity with all his wealth and fame going to tell us what’s wrong? That is a pretty weak point but in the end Brand is doing what a comedian is supposed to do. If the funny ones don’t asks the questions for us then who will?