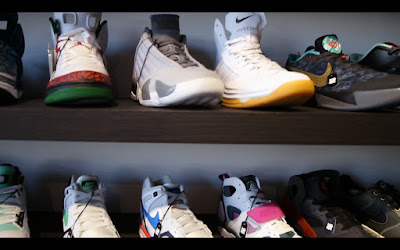 I’ve loved sneakers (I prefer the term tennis shoe though) since I was a child. Ain’t nothing in the world like getting a fresh box and smelling a new pair of shoes. Holding them and looking at them, checking yourself out in the mirror. Styling on them. Stuntin’ heavy.  I got in deeper in college in NYC checking out the serious shops and such up there. Trying to find out how to intern at Nike (still a dream job by the way) and always trying to get a pair of Jordans. Got some at age 23, them 18s. I really wanted to learn even more in the early 2000s around that time a documentary came out call Just For Kicks came out. It was a pretty great time stamp of that time in sneaker culture in my opinion and now ten years later I get a chance to see this new film Sneakerheadz that I feel after watching it twice is also a great stamp of time of the culture.

So what is Sneakerheadz about really? It’s about culture of athletic shoe enthusiasts as it is right now and how mainstream it has gotten from its underground/subculture status of the ’90s. The film is mostly explained through interviews with fairly known sneaker aficionados around. A lot are sneakerheads who became designers and store owners from all around. Through it the film basically ends up talking about a major factor of the spread of urban fashion over the last 25 years globally. The film feels right for this time; it feels like the highest evolved form of what a Complex website video piece could be.

As maybe not an expert myself but a person that enjoys having something fresh to death; it’s interesting on how it kind of skates around the importance of athletes in regards to shoe culture and it never really explores how we’re at the point when maybe the shoe lovers with means,like designers and influencers, are starting to control what the hottest shoe’s potential can be. It never really explores how rappers influence these shoes and how Run DMC – Kanye, Pharrell and Drake are now able to sell a shoe even better than a basketball player.

Sneakheadz does a great job of asking some questions about the state of the culture in regards to how easy it is to get into versus the past when you had to travel and learn. The Internet makes it too easy for old heads. I wish they had a little more female representation in it but there are a few in there who are known in the culture. Maybe in a sequel I guess? I like that they take time to talk about the violence around these shoes. It takes the time to explore this phenomenon of young people dying for these shoes and tries to come up with some solutions. To be honest I think a whole documentary could be done on the positives and negatives on just the Air Jordan line of shoes since this violence has clouded this line for the majority of its existence.

This year has had some great explorations of urban fashion, especially stuff that closely connected to the hip-hop culture; this film along with the Fresh Dressed doc (review here) is giving some great context on a part of history that’s not just the music or the setting. Overall this is a pretty great little documentary for this late summer season. It’s back to school time and a lot of shoes are about to drop in the next few months. It’s nice that maybe the uninitiated and maybe some old heads and young heads could sit down and watch this to bond over their love of shoes.