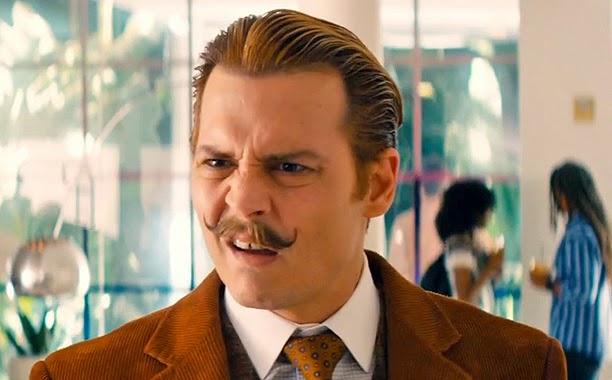 So look at here: We are starting out 2015 with a new Johnny Depp as a crazy character movie, huh? This time it’s supposedly for adults with the whole R-rating thing. I guess he just has no interest in playing someone regular again. Oh well, he was quite good at it at one point in time.

So what is this movie? It’s called Mortdecai. It’s based on a series of comedic thrillers from author Kyril Bonfiglioli that I clearly have not read. Also starring in this is Gwyneth Paltrow as Johanna Mortdecai, Ewan McGregor, Paul Bettany, and Olivia Munn. I guess their goal was to make a really funny British style comedy for American people but it seems like they failed on both sides here.

So what is Mortdecai about? It’s about this dandy-like British art smuggler by the name of Charlie Mortdecai (Depp). He bubbles around as he’s trying to get money to pay his 8 million pounds in taxes. A famous art restorer is murdered for this famous Goya painting and his old Oxford rival Inspector Martland (McGregor) asks him help them find the murderer and the painting. This takes Mortdecai and his manservant Jock Strapp (yes that is his name, and he’s played by Paul Bettany) all over the world trying to find this painting. Total hijinks ensue … I guess. The B-plot is Mortdecai having marital issues with Johanna, his wife, because of his new mustache that he loves so much and she hates.

You know the thing with this movie is that it’s not good but it really doesn’t suck enough to hate. Mortdecai just washes over you in uninterestingness. It seems like they were trying make something in the old Peter Sellers Pink Panther lane of comedy but it never catches on. In a lot of ways the pacing and the structure feels like it would be a really good animated movie. I’m thinking with the way the performances are and the costuming being so over the top, this would’ve been great as a cartoon. The movie really relies too much on weird facial expressions and goofy pratfalls. The cinematography really isn’t anything to talk about other than these silly over-CGI-ed transitions from city to city.

The real saving grace to this whole thing is Paul Bettany as Jock Strapp. He’s hilarious during the whole movie as Mortdecai’s tough guy/ladies’ man manservant. Watching makes you think this story would be a lot more interesting if it were from his perspective rather than Mortdecai’s.

Another funny thing with this movie is the two stars of it are American actors doing English accents, whereas everyone else is actually English; it’s a bit disjointing. I don’t know if Gwyneth Paltrow’s accent always works.

But seriously, this movie really isn’t something to go out and see in the theater. It might be something fun to watch at home. As I said earlier, it isn’t good enough or bad enough to even get a real reaction. I think Mortdecai is something to pass on and instead just go catch up on Academy Award nominees.