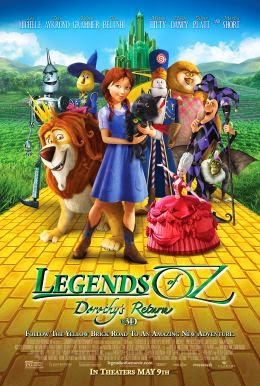 Oh the Wizard of Oz. That first story about the little Kansas girl and her dog being swept away to a magical land has surely lasted the test of time. A completely American fairy tale it’s been able to spawn so many books and adaptations. Last year we got the live action prequel Oz the Great and Powerful and this past season on TV with Once Upon A Time added the Wicked Witch of the West (don’t ask me how that works with the Disney princess stuff). I guess with this whole resurgence of interest in Oz someone decided they needed to also combine with another trend of 3D CG animated family movies and that’s how we got Legends of Oz: Dorothy’s Return.

Now here’s the thing; this isn’t based on any of L. Frank Baum’s many books that happen after The Wizard of Oz, it instead uses some out of canon story by his great Grandson Roger Stanton Baum. Now I can’t say if that book is good but I do notice that no one talks about many of the sequels that aren’t considered canon and I don’t think many people will be talking about the movie either. This movie is a mess and to be honest a lot of CG films this year just haven’t been that good but this might be the worst one I’ve seen all year. This film is completely forgettable and really uninteresting to look at with some of the flattest 3D to be done in the cinema all year.

The story of the film is that in Oz time a few years have passed and Oz has fallen prey to a new threat called the Jester, who is using the Wicked Witch of the West’s broomstick and a magical Orb to terrorize all of Oz.  The Jester also captures all the leaders of Oz and turned them in marionettes. The Scarecrow, along with his friends the Tin Man and the Courageous Lion, find a way to contact and bring Dorothy back to Oz. For Dorothy the entire original adventure in Oz just happened a day a go but once she returns to Oz she has to complete another journey and make a new trio of friends to defeat this new magical bad guy.

Basically this whole story retreads the same type of journey seen in the classic ‘Oz’. This time she meets a big, really brainy Owl named Wiser who really has no confidence. Then a solider of Candy County called Marshal Mallow who doesn’t know how to think for himself, and she meets the China Doll Princess, who must learn to not be so demanding and mean, a tired old princess trope seen many times before. Then the last person they encounter is an old talking tree who they turn into a boat called Tugg. The whole movie is 88 minutes of what feels like either a direct to DVD release bumped up to prime-time or three half an hour cartoons poorly tied together. Half the movie is singing with songs that really don’t help or move the plot along at all. There are points where you start to get into the story just a little bit before some annoying song starts blaring out of the speakers leaving you asking why and what’s happening. The vocal performances are decent with the singing all done very well since it’s by Broadway performers and people from Glee and Smash.

To what I said earlier the design of the movie is completely uninteresting. Most of the character designs are pretty generic or coming from old CG movies. Most of the lighting is very flat and the texture at time really didn’t bring any depth or sense of believability to the world or characters. It felt like watching in game cut scenes from launch era GameCube games. There was one short scene that the crew did a fantastic job and it’s where Marshal Mallow gets tricked into asking the China Doll Princess to marry him and even though it’s short it’s the only time I sat there and was like wow these folks did a bang up job making this. The 3D is also a waste if makes a lot of the film very blurry and darker than normal for 3D movies and again nothing really pops out. I took off my glasses a bunch of times while watching and it and I lost nothing. The 3D actually makes Wiser look the worst since his edges of his feathered body is always blurry.

So as you can see I’m not too fond of this movie at all. I don’t think you should waste your time with this unless you have a kid so into the Wizard of Oz that they will annoy you until you past out. This is something to me that so bad you shouldn’t even waste a red box on. With all the options out there just go watch the old movie or read them the book or even the comic adaptations. In the end when I walked out I felt like I just watched a failed Broadway musical that got turned into a failed animated movie that no one else should have to suffer through.