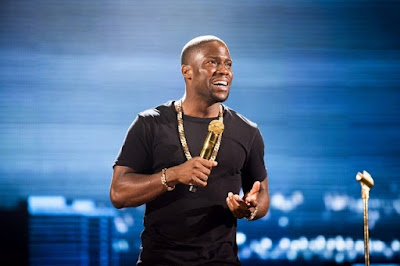 So I’m sitting here wondering how do you really sit and review a stand-up comedy concert film? Like does editing and cinematography really matters here? Is that a standard to even think about? There really isn’t a plot because like come on its stand up. I think first things first Kevin Hart is right now and has been for a few years THE most visible and mass popular stand-up comedian we have. You can counter with Louis C.K., Aziz Ansari or Amy Schumer but Amy isn’t at that level yet, Aziz kind of has a certain niche in that “lovelorn let’s explore romance and ball out” lane and Louie is like the artisan of comedy. Kevin is the one that people instantly gets, can be annoying and you worry about him over saturating himself but somehow he’s just likable enough to keep his hustle going. Which brings us to his newest concert film What Now? It’s been a few years since his last one, Let Me Explain, and here his goal is to take it to another level. Like the last film he bookends his movie with fictional story on a problem on him getting to his concert.

Hart has chosen to parody the James Bond film Casino Royale. Here in this short little movie you have Kevin Hart as a super spy with Bond girl Halle Berry as he tries to play in a super-secret poker game to win all the money for his global comedy tour. Here they do a great job of sending up the Bond movie tropes with what you know of Hart’s humor and persona. Much of this is helped by great cameos in this scene that I won’t spoil for you. From there on the movie is the stand-up performance. Here is more of  the bread and butter of Hart’s life – being a husband and father and his observations as such. Of course there is more of his impersonation of his father, and it still brings in laughs. His jokes are as solid as ever but I say that as a person that always finds his jokes funny. Kevin Hart has never been subversively funny like Dave Chappelle or Chris Rock but he’s never squeaky clean or one-note like Larry the Cable Guy, or even I’d say at this point a D.L. Hughley (preparing for the possible clap back one day).

Kevin Hart: What Now? Is a solid release from a very consistent performer that doesn’t sway too far from what got him where he is now. You feel the energy on screen and in his stage presence as usual. The audience I saw it with was laughing the whole time and enjoyed themselves. Not much you can ask for when seeing a movie in the theater. Right now Kevin Hart is the comedy king in theaters and I don’t think anyone can knock him off until he stops doing it. What Now is some I can see myself watching again and again.