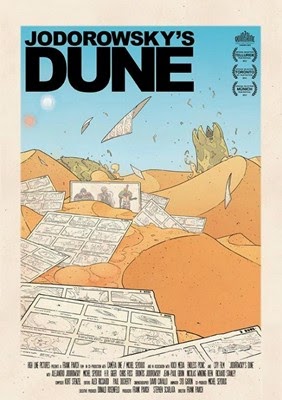 Dune. I never got why people loved Dune so much when I was kid or really even now as an adult. See when I was young I saw that movie with Sting in it, the musician not the professional wrestler and I thought that movie sucked. Spice? What are you talking about spice why is this special. You get older and you meet other people and their all like you need to read this series man it’s the best but for me it’s just that wack movie from the 80s with Sting in it that would come on before Labyrinth on local TV channels. Then I go I see this film called Jodorowsky’s Duneand I see a film that shows all of what we could’ve had by such a forward thinking artist Alejandro Jodorowsky ambitious take on Herbert’s beloved tale. This film really isn’t about Dune at all it’s more about an artist’s journey in creating a piece of only to have the gatekeepers snatch it away from him and his collaborators at the last second because of a lack of faith or fear.

The film begins with introducing us to Jodorowsky and his early adventures in film making mostly told from his perspective and a few others about how those films were seen at the time. He explains the avant-garde style he took to film making from his background in theater and performance art. The film then goes into his experience reading Dune and trying to make the film. As a complete newcomer to Jodorowsky in this medium and this story of the failed Dune project at all it was quite enthralling to see just how passionate he continues to be about the film. He speaks of it with total recall of the events and feelings and concepts he had in thinking out this film. Jodorowsky then goes through his experiences of writing the script using every facial expression I think a human face has it seems then he goes on spiritual leader like explanation on how he found his artistic collaborators.

For me the best part of the film is the focus on all the artists he worked with in designing this movie and screen time just showing the production art from the storyboard and Character designs by Mœbius, beautiful ship and set designs by painter Chris Foss and character designs and set designs by H. R. Giger. The film feels as much as a story of what could have been as much as being a studio head being pitched a film. Through the art shown, hearing Jodorowsky tell his version of the tale along with who he was casting for the characters you really get a feeling of the film just using your imagination. Jodorowsky is great storyteller.

I have to be honest here I might be biased with this film. It’s very hard for me to find any real flaws to this maybe other than wishing it was longer. Being that I’m a creative person I might be bit too close to be objective or I might be the best type of person to review this film. This documentary is at times like taking what is one of the special features from a DVD or Blu-Ray release and just showing that instead of the movie.  I don’t know if that is for everyone to see but if you like process of making things or just like knowing more of the creative thinking process then it’s totally worth it. This is one of my top films of the year already and I don’t think that’s going to change at all.