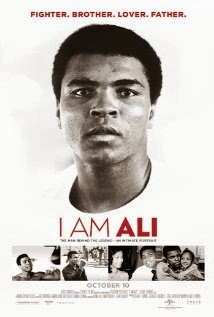 We are at a weird time here with professional sports in the United States. It seems like each week we hear of another scandal of sports figures that are in some sort of issue of domestic violence, child abuse, or some drug-related crime and this past spring we had to deal with racism from an owner of a NBA team.  With all this stuff going on much of the time, the biggest sports stars, and even some of the retired ones, stay silent or say even more problematic things when asked about it. So with all this going on it was really good to sit down and see I Am Ali to harken back to a time before myself when Black sports figures, because of their celebrity, had to help uplift and stand for things that would help us all and there really is no better person in that than Muhammad Ali.

I Am Ali is different type of documentary about the legendary boxer and sports figure from the 20thcentury. Unlike past documentaries about him that usually focused on his fights and comebacks, this one takes another path. It decides to focus on the person that he is and how he got to that from being a young kid to having a career later in life. Director Clare Lewins achieves this by using personal family recordings of Ali and his children along with tons of personal film recordings and other clips from the media to tell this story. This film uses a style reminiscent of the documentary Marley by also having interviews with people close to Ali like his daughters, brother, ex-wife, etc., and other sports figures or people influenced by him like Jim Brown and Mike Tyson.

The one thing I feel this film does really well is that it tries to give you a well-rounded picture of the man and the times he was in. Balancing it with testimonials that aren’t the usual look at just how great a boxer he was. The film is more about what he believed and what he was thinking about, which brings something new to the table. This film could really be used to introduce younger people to him that really have no knowledge of Ali in this current state of just Money Mayweather or UFC.

With that being said, some interviews are more enlightening than others. Hearing Jim Brown speak on Ali was interesting because they both were important to the pro-movement at the time. And to hear him speak on his friendship with Ali was something I didn’t even know. The interviews with his children Maryum, Muhammad, and Hana along with the recordings of them as children added the right amount of personal flair to really hold the film together like thread tying the different eras of his career together.

The one thing that I’d say was a flaw is that the film is about 95% positive in talking about Ali to the point where it feels they are talking about a demigod. Now, Ali is a great person but he is a human being and he had flaws. There is a little touch on this at the end after talking to his ex-wife Veronica Porche when she makes a comment about his infidelity. Now I don’t want some great trashing moment of his character but I do wish that had been explored a bit more to make it a better-well rounded film. Some more talk about each of his wives if possible would’ve helped. Overall I Am Ali is a great film about a very influential person that inspired a lot of people all across the globe.  I Am Ali is something that should be seen and shown to as many people as possible who don’t know Muhammad Ali.