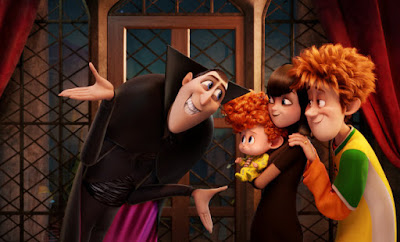 I really sit here wondering if anyone was caught by surprise with the fact that Hotel Transylvania got a sequel? I was shocked for sure. Was the first really that good and made that much money? Well at this point it doesn’t matter. Adam Sandler and Robert Smigel wrote another movie and they sadly got Genndy Tartakovsky to do this after killing that Popeye the Sailor movie. All these things gave Sony a nice Halloween pumpkin spice cartoon for the season to sell some products it seems. Being I’m a bit of an animation enthusiast of the Punch Drunk Critics I said I’ll take this. I watch cartoons on Saturday morning but sadly I could’ve watched repeats of Gumball on Cartoon Network and had a better morning.

So Hotel Transylvania 2 goes through the motions of time very quickly. Jonathan (Andy Samberg) and Mavis (Selena Gomez) get married and have a son in a montage lasting a few minutes. So you get to the point of Dracula (Adam Sandler) being just as much of an overprotective Granddad to Dennis (Mavis’ son) as he was a father to Mavis. The main crux of the film is Dracula excited for the possibility of Dennis being a vampire while Mavis is becoming a helicopter mom and thinking of moving away from the Hotel to California. At this point there are many things that Dracula is trying to do to get Dennis to transform into a vampire while skirting around Mavis. The parts here are where the movie becomes mostly a cartoon version of a Sandler movie in writing and gags. We get essentially two movies with poor Jonathan having no growth as a character at all from the last movie. His character could’ve died and you would’ve had the same movie basically. The movie at a point feels like three half hour cartoon episodes strung together. The last act has a villain and a grandfather (Mel Brooks) that really pops out of nowhere. It doesn’t make much sense along with the action set piece at the end. While it’s nice to see this part as the only sequence where you can experience Tartakovsky’s animation style and cartooning genius it doesn’t make any sense that it’s in there. It does make you want a Dial M for Monkey movie though.

One thing that really takes you out of the movie is the force-feeding of Sony product placement in the movie. I joked that we were going to see a PlayStation 4 in the movie 15 minutes in since at that point we had already seen multiple Sony android phones and televisions. While there are laughs throughout the movie there is overall less heart in this sequel than the last movie. That’s saying a lot since the last one wasn’t anything to cry at home about, either. Most of the look of the movie is on par with the last one with some small apparent improvements to the design and effects.  The hair on Dennis is really something. It’s to the point I think hair in CG animated films will reach the uncanny valley way before anything else.  A lot of the lighting set designs are nice. The lighting really works well with palette along with the way 3D works in terms of darkening everything. Maybe it was thought out but it might also be a nice happy accident.

Overall Hotel Transylvania 2 is not that great and not terrible either. It’s a project that you wish the Tartakovsky had invested a bit more of himself in. While his name is on it I don’t lay the blame with him.  It’s sadly something that I don’t think will really hold the attention of many kids over time and surely not something you would want to have to sit through again and again. In the end what you end up with is Monster Grown Ups and I think we all deserve a bit better than that.