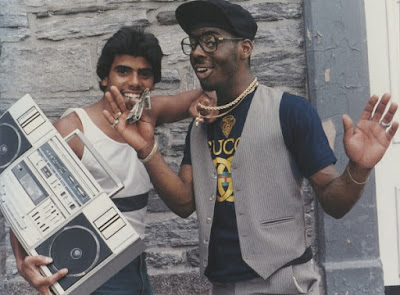 I’m a pretty big hip hop culture nerd as I get older. I end up spending a lot of time reading things about the origins of hip hop and the creation of the music. I’m constantly asked questions and giving long explanations of the simplest random hip hop moment. I find the culture, something I grew up with all around, immensely fascinating how it is constantly and currently the most dominating part of popular American culture here and abroad. It connects to the urban Black and Latino communities. So when I heard about Fresh Dressed I got excited; a documentary about one particular facet that’s not really talked about openly but very much important to this day – the fashion. Not everyone knows what or even why being fresh is important but standing out and being an individual, even trendsetting brings about a sense of self and purpose, especially when you come from very modest means. This documentary is about like a lot of things in hip hop –the come up.

Like a lot of current TV miniseries on hip hop of late they cover some of the basics of the beginnings; like the fat laces, Gazelle sunglass, and the like plus it’s origins in the Bronx, New York in the late 70s (you can actually say solidified since some parts started earlier than others). But then it also goes in with interviews on how the fashion was different per borough of the city and how that influenced the young people at the time. Another really smart thing this documentary does is go a bit more in depth on the figure of Dapper Dan and his ingenuity of using the materials from designer fashion houses bags and luggage to make things like MCM or Gucci jumpsuits for at first drug dealers and then hot rappers of the time. It was filling a need at a time when those fashion lines didn’t really want the young black and brown customers in their stores; let alone wearing their labels. The film makes a great narrative that Dan’s bright idea basically changed fashion to what we have now which led to streetwear and the like.

At that point the film basically explores the rise of the hip hop-based minority-owned fashion lines. Since hip hop always had a very entrepreneurial spirit you can see how that spread into every facet of the burgeoning industry. These people fought to be taken seriously and get into stores and not be pushed out of it by the larger, more established and white-owned companies. The film smartly shows what these people did right and what they did wrong. In terms of flaws the one thing I can say is that while it’s a very good film the subject matter actually could’ve used more time; maybe a miniseries just on this subject. There are a few more people that would’ve been great to seen interviewed and the ones they did needed more time. Also the importance of athletic shoes is not really explored as much as it should’ve been for good and bad. Maybe they did that since there are few other documentaries on just that subject. But most don’t fit it in the culture and I think these filmmakers could’ve done that.

This is something I think a lot of people should really check out.  I think it can give people a better understanding of youth culture as a whole and a lot on some of the fashion trends of the last 25 years easy. I think it can help some of the young hypebeasts (google it if you are old) understand a bit where all this comes from and that all this they think is new really isn’t. The filmmakers and producers did an excellent job. It’s fresh to death.