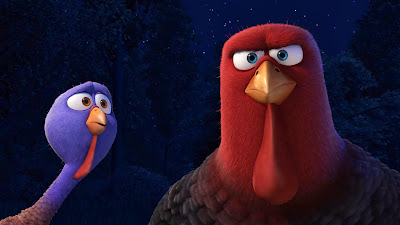 It seems every single month now there is a new computer-animated film coming out so that people with children can go to the movies. They market it hard and make special 3-D glasses for the kids and sell fast food kid meals so that kids will bug their parents to take them to see this bright and colorful 90-minute adventure in safe-movie land. This time in November, we get Free Birds, which to be honest looked really flimsy and a terrible idea. What we got though is a pretty enjoyable buddy movie with great winks and nods to Back To The Future and Bill And Ted’s Excellent Adventure.

Free Birds is a crazy movie about a nerdy turkey named Reggie (voiced by Owen Wilson), who is an outcast at the turkey farm he lives in. He ends up being the pardoned turkey by the President, who I might add for some reason sounds like Bill Clinton. So Reggie now lives at Camp David and has found out about pizza. So check this, a turkey calls and orders pizza in gobble gobble turkey speak. While Reggie is living the life of luxury, he is then kidnaped by Jake, the one and only member of the Turkey Liberation Front. Jake was told by the GRREAT TURKEY to get Reggie and find a time machine and go back to the first Thanksgiving and stop turkeys from ever being part of the menu. Yes, that’s as convoluted as it sounds.

You know, the voice acting really sells a lot of this movie. Owen Wilson is in his full Owen Wilsonness as Reggie. All his vocal tics are there, so if that bothers you in live action that might actually bother you in cartoon turkey form. Woody Harrelson is hoot as the super alpha turkey Jake and his want and need to save turkeydom from being dinners. His character is lovably jock stupid. Amy Poehler was good as Jenny the female turkey princess in the past that Reggie falls for. To be honest, the whole Reggie/Jenny thing is very much something you’d get from a romantic comedy Wilson would be in, just in cartoon form. Also George Takei is amazing as the time machine computer S.T.E.V.E.

One weird thing about this movie is that the turkeys are portrayed as Native American like against the English colonists. It’s a weird way of not dealing with the issue of how actually messed up what happened to native peoples in regards to Thanksgiving was. And then it gets really weird once you see actual Native American human characters in the movie.  The look of the movie is quite decent in terms of lighting, textures, and character design, but it’s not amazing either. The quality seems just a little bit above the direct-to-DVD computer animated sequels. The 3-D doesn’t really add much of real pop, so really you can save the money and see the 2-D version.

Free Birds is a quite surprising little family movie. That concept of time-traveling turkeys to stop Thanksgiving is something you think would be deserving of a “c’mon son” greatly. Luckily the everyone involved managed to craft a nice and entertaining family movie that is actually for the thanksgiving holiday. Free Birds is a movie you can go to and not feel like you’re going to suffer.