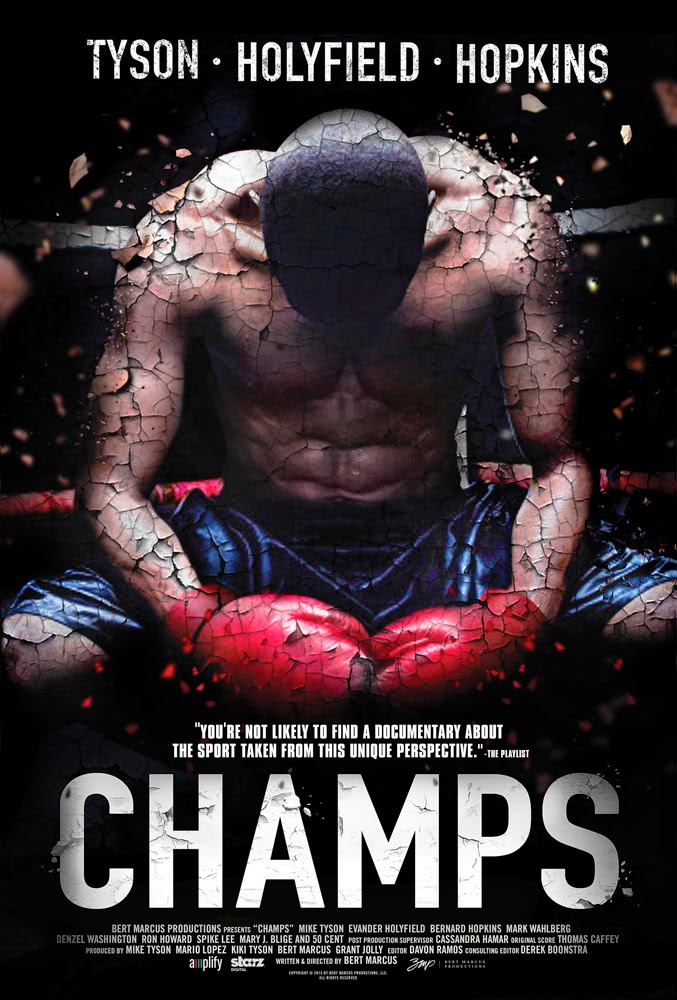 Right now we seem to be in a fantastic time for the documentary genre of film. Every subject imaginable seems to have a banger of a film out there. Sport is a great subject. but one sport that really hasn’t been explored as much is boxing. Now yes there are documentaries on boxing but most, of late, all focus on Ali. Ali is a very deserving subject but there are some more stories to tell and Champs is the film doing it. Champs focuses on the stories of Mike Tyson, Evander Holyfield and Bernard Hopkins. The film starts by telling the stories of boxers of the later 20thcentury to setting up that the sport from that era until now was a great example of the blessings and ills of capitalism.

The film starts off giving the backstory of the three subjects’ childhood. They spend some time of course on Tyson’s rough childhood which in a way because of his fame and notoriety is kind of well-known or I should say covered in other films and such about him. A lot of the background on Holyfield is new to a person that doesn’t know the ins and outs of boxers and the sport, the same with Hopkins. One thing I feel the film really does a great job of doing is making a parallel of the stories of Holyfield and Tyson leading to their heavyweight match in the 90s. Along with all the interviews with other celebrities and boxing insiders it crafts a story of just how big the Heavyweight division of boxing was from the 80s to the mid 90s in a time before other weight classes had their stars, like De La Hoya, Hopkins, Jones Jr., and Mayweather.

The film, of course, has to follow that same course of action that a lot of these stories do, with the fall of the two big heavyweights while counter balancing it with the career and rise of Hopkins. The one thing they really center on is his intelligence and will to succeed in the business and take care of himself. Which is something the last third really spends time on…how the business treats its athletes. At this point the film, which feels a bit like an ESPN 30 for 30, starts to morph into something like Frontline light. Now I don’t say this as a bad thing as I feel that, in terms of documentaries, they have become the standard. I feel it’s really smart of them to go that route; story, explanation and then question.

Champs really exceeds at giving a good look at a more modern style of Boxing champion and his place in society and pop culture. It also brings up a lot of questions that we hope can be answered. As boxing moves into the 21stcentury alongside the rise of sports like MMA which, in a way is moving into boxings spot in pop culture. It’s interesting to watch this and compare it to the coming fight of the century (that’s only 14+ years old) coming up in May and see where that next generation of big fighters are going to come from, as this generation is on the way out.