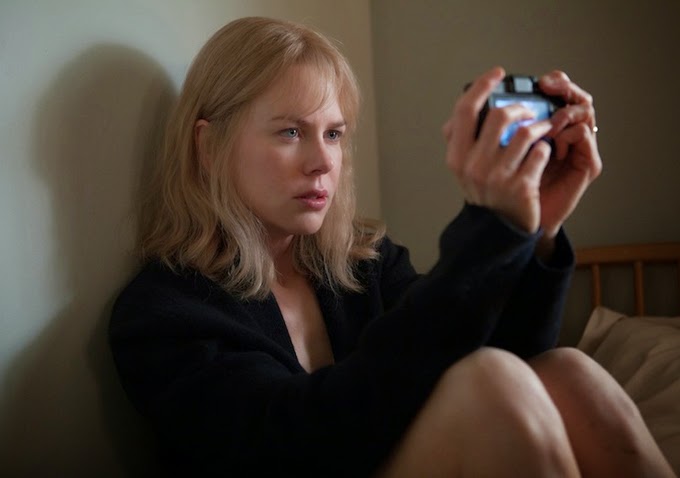 Now when I first saw the trailer for Before I Go To Sleep not too long ago while seeing Gone Girl I felt like, “Hmm this seems a lot like Memento with creepy dudes in it.” So when this the film started with its extreme close-up on Nicole Kidman’s eye and then zooms out to see her in full, awakening from sleep it’s jarring, much like it is for Kidman’s character Christine who doesn’t know what’s going on.  Seeing this picture taped on the wall with notes all over them feels like we are thrown right in the middle of this story but also gives you that Memento feeling.

To tell the truth much of the first half of this film feels like an alternate take on that type of story, only much less manic and less focused on confusing you with an ingenious storytelling method. Once the film gets started by flashing back a few weeks it’s almost like watching someone play a video game and constantly having to start over like Majora’s Mask. See Nicole Kidman’s character Christine had something happen to her some years ago; her husband says an accident but a doctor says an attack has caused her mind to forget everything she experienced each night and wake up the next day with no memory but of herself in her mid to late 20s.

Christine is constantly in a state of confusion and really at the will of two male characters; her husband Ben played by Colin Firth and Dr. Nasch played by Mark Strong. For a good portion of the film, you can’t tell the intentions of either character since she can’t remember anything the next day. She was given a camera by Nasch to record what she learned that day on video so that she can continue the next day. The main thing that really adds to the atmosphere of the film was the color palette more than anything. The Chroma of the film is a constant cool grayish blue, while the setting isn’t stated you can assume it’s England. The cool color and look of constant dampness adds to a malaise throughout Christine’s journey with even the lighting a more neutral warm that at times looks blurry or foggy.

About halfway the film really changes tone; it goes from interesting mystery thriller to straight up old school lead female character in danger thriller. At that point, it’s nothing like Memento and starts to feel like a Lifetime Movie with way better pieces. Like a gourmet cheeseburger, while it has fancy ingredients it’s still a cheeseburger. A few things that really stood out to me in this part, the female lead didn’t need to be saved and that it ramped up to the end tightly. The film started out slow but ended in way that didn’t feel drawn out or rushed and that’s pretty surprising for a film that’s about hour and a half in runtime. Before I Go To Sleep is a pretty good option to see this Halloween weekend, a great alternative to a movie like Ouija.