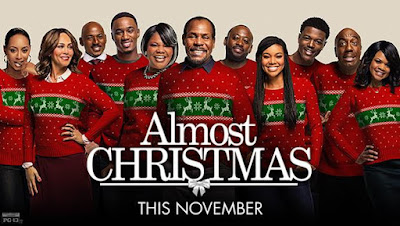 Another year and another black led holiday film. Sometimes these are pretty decent film going affairs like This Christmas, sometimes it’s pretty terrible like Black Nativity. So where does Almost Christmas sit? It’s a future hood bootleg classic. Some of you may ask what that means, put simply it means that it’s good enough that most black folks will see this in a barbershop or from their uncle with the movies to watch on Thanksgiving day or Christmas. It’s a middle of road holiday weekend movie but maybe not one to run out to go see.

Almost Christmas is about Walter (Danny Glover), he’s an old man who lost his wife almost a year ago. Every year he looked forward to having his entire family come home to spend the holidays with him and his wife. Now this year he hopes he can bring his children together to spend their first Christmas without their mother in a happy and peaceful way. To help him he has his sister in law, May (Mo’ Nique). Kimberly Elise plays Cheryl, the eldest daughter who’s married to Lonnie (J.B. Smooth), a former pro basketball player with a wandering eye. Romney Malco plays Christian, the eldest son who’s running for state senator. He brings with him his wife Sonya (Nicole Ari Parker) and their two children. Gabrielle Union plays Rachel, who’s going through some hard times as she studies to be a lawyer and raise her daughter Niya. Last is Evan, played by Jessie Usher is a college football star who’s coming off of an injury.

So after that plot recap, Cheryl and Rachel don’t get along. Lonnie is thirsty for a girl who works at piggly wiggly played by Keri Hilson, and Mo ‘Nique is just ab-libing her whole role on screen during this movie. Danny Glover actually feels older on screen than what he might be or the character he is playing. He feels like he’s a granddad more than a father. He does a well enough job showing how much this man misses his wife and the exasperation of how his grown children act toward each other. Gabrielle Union I think really holds this movie together on the adult acting side. She’s always had a great sense of comedic timing and facial expressions along with somehow not aging and constantly playing women younger than her. Throughout most of the movie, you end up feeling for her the most. But when you’re watching you notice something – the actors are just playing versions of themselves from previous roles.

Kimberly Elise is essentially playing her character from Diary of a Mad Black Woman. Omar Epps plays Malachi, who is essentially his character from Love and Basketball and by that I mean he lives next door and walks through the bushes just like that movie. He’s Rachel’s love interest from high school where they had unrequited love kind of like the one from Love and Basketball. Danny Glover is too old for this shit like the great Roger Murtaugh and Jessie Usher is playing a young, hip star Athlete like his character of Cam on the STARZ show Survivor’s Remorse. It’s like man this becomes some weird type of fan fiction that became a movie somehow. It’s funny and along with the super predictable script, I feel this really hampers how funny this movie could’ve been.

Mo ‘Nique was trying her hardest though all the biggest laughs come from her, it’s good to see her on screen again. J.B. Smooth couldn’t keep up with her improv but he damn sure was trying. The child actors in this movie did a great job of being authentic in terms of how kids are these days during the holidays. Precocious and sarcastic they hit the right notes at the right time but should’ve been used more throughout. Romney Malco is wasted here, he’s very funny on screen but rarely gets the scenes to show it. Now I saw the audience applaud and I could be way off the mark here but I don’t think so. I’m not really sitting here like go pirate or buy a bootleg of this movie but I do think this movie is a way better watch at home on the TV versus spending that movie ticket money to see it. You’ll get through this movie and laugh a little but really going with the cast that’s there you should be laughing way more.