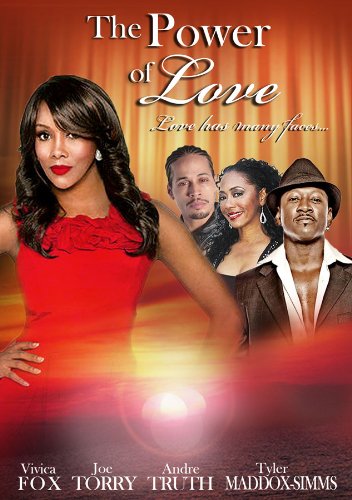 So every now and then I get my hands on a DVD or a link to review over here at Punch Drunk Critics. These magical things are like the biggest random element to grace a critics’ eyes because who knows what this is going to be. You probably don’t have a poster for your imagination or kick butt trailer that has you excited for a month or worried about wackness. This time the movie gods gave me The Power of Love by Tyler Maddox-Simms and staring Vivica Fox, Joe Torry, Andre Truth and Tyler Maddox-Simms herself.  Now let’s say out of the gate this was not the type of surprise I was hoping for.  I am not pleased so let’s get on with the reasons why.

The Power of Love’s story is that a radio station in LA invites author PJ Payton (Fox) on the air to discuss her new bestselling book, ‘The Power of Love’, and while there she talks with listeners about how the power of love improved their lives. The film mostly uses the radio station and the DJs as a framing device before it goes into showing each of the listeners’ stories as they are explaining them.  Here’s the thing about this movie: it is pretty boring, and it’s really hard to hold interest in what’s going on. Beyond that it’s heavy handed in its message of love and faith.

That’s not to say those things and subjects are boring but the way the story is presented leaves a lot to be desired. The acting is unbelievably subpar.  None of these characters seem like real people or well-rounded at all.  Also most of the cinematography in the movie is very uninteresting. The interior scenes all seem to be at the same shot level and the lighting is dull and cheap.. That is something that can really turn a viewer off, especially with the other elements lacking so much.
Now the script is at times cheesy to the point of it being laughably bad. So, add that the actors aren’t delivering the lines well, with the fact that the lines themselves have you scratching your head because no one in real life would say these things. Also it seems to take too much time with each caller story. They just go on and on and on with it, and as a viewer you’re sitting there like” get to the point”.  Another thing: Why is Vivica Fox so pronounced on the cover when she really isn’t even in the movie much at all? It’s a bit misleading to make you think she’s a driver of the plot when she’s no more than a glorified cameo.

It’s not really enjoyable to really tear a movie like this down, especially when you think the heart is in the right place. The themes they want to be expressed aren’t bad, just communicated poorly by bad storytelling and filmmaking.