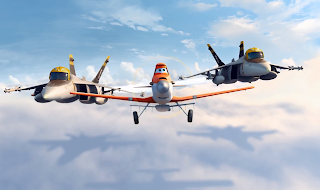 A lot has been made about tentpole movies of the summer and how it’s going to destroy the business, but there has been another trend along with the explosions and superhero costumes: the CG animated feature. We’ve gotten to the point where all of the studios rush to constantly have 6-9 animated features in a year since it seems that families are sure to go to the theaters and see them. Now it’s even gotten to the point of affecting spin-offs and sequels. Stuff like this didn’t happen in the ’90s. If you wanted to see Aladdin 2 that came out on VHS before getting a cartoon series. It was pure home video fare, but now that’s gone and the studio will just throw them out there in theaters and see what happens, no matter that it might drop the audience’s trust. This just happens to be the case with Planes, an on display case of cash-in “sequelitis” and possible CG animated over-saturation.

Planes is the much-rehashed story of a young character wanting to be more than what they are told they are and striving to follow their dreams. This is much like DreamWorks’ Turbo even down to the racing style plot. Planes follows Dusty Crophopper (voiced by Dane Cook), a small farm crop dusting plane who dreams of being an air racer. The thing of it is he isn’t made for racing but that doesn’t stop him from practicing every day. After trying out for the big world race and just missing it, he gets a shot to enter the big race and show the other racers, his friends, and the world if a crop duster has what it takes to race with the high flyers.

Ok so as said earlier this movie has a plot that’s been used to death especially in animated and family fare for years now, but especially recently. We’ve all seen this and to be quite honest this really isn’t the most engaging but it’s not that terrible either. Planes was originally supposed to be a straight to DVD movie but was bumped up to theatrical release and the thing is writing wise you can really tell. Most of the jokes in this movie don’t really land and aren’t very clever. There are a bunch of easy stereotyped characters and vocal performances.

The one thing where this film sings is in its technical craft. Out of all the CG animated movies this summer, only Monsters University looks better. Every single texture, character model, lighting, water, particle swirl, camera move was top notch. So top notch it’s surprising the actual plot and writing wasn’t better. You can see a lot of care went into this production. It really sings when you see the planes fly around the screen and the film goes to all these angles and moves referencing past flight films, specifically WWII movies or Top Gun. Also the movie does a good job in regards to depth with its 3D. Most stuff doesn’t pop out but it give you a good sense of space.

You know it’s really hard to defend this film because it’s so average. It’s boringly average for a feature film release but it’s not completely terrible. It’s really watchable but it should have stayed in its original direct to DVD release. Smaller children and Cars fans should enjoy it and it’s going to sell a lot toys. The sad thing about this is that it might not really matter what it does since the Cars franchise is completely kept alive from toy sales, so we might end up getting an even lesser version of this, probably titled Boats.