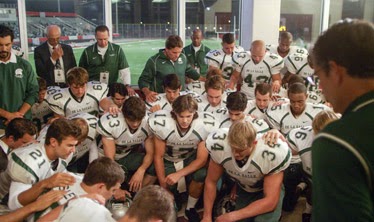 When the Game Stands Tall stars Jim Caviezel as Coach Bob Ladouceur who led the De La Salle High School varsity Football team to a 151 record-setting winning streak and what happens as the streak effects his life and those of his family and players. See here’s the thing; most people, me included, are pretty easy to please with a sports movie. Especially a HIGH SCHOOL FOOTBALL MOVIE! This is America and we love football. Here we have a movie with Caviezel portraying this almost perfect coach in terms of his moral standing and reasoning for coaching these kids. These kids are perfect at least the ones in the beginning of the movie. The seniors that are leaving are great, demigod-like athletes with wholesome attitudes like they all came from Smallville, Kansas. After the first 15 minutes or so just about every bad thing that can happen to the team happens, just as they are beginning to be led by a new group of flawed senior athletes. It’s all serious; old players die, some players lose all their family, and some experience major incapacitating injuries.

It begins to feel like a little too much as major sad events are piled on and a Christian-themed message is forced into the story. They all feel out of place and like the movie doesn’t know what it wants to be. Does it want to be a sports movie or a spiritually uplifting movie? I don’t know if the film makers know themselves. The movie is also totally too long and poorly paced throughout. The movie would’ve been a lot better if they would’ve just focused on the team’s fall from grace and the need for the team to rally together in time for a major game against the country’s best team. What happens is that the story’s true climax happens in the middle of the film.

There are a lot of well-filmed football scenes throughout the movie along with some decent performances. What they are performing doesn’t always make a lot of sense, but what is worse is the team’s triumph doesn’t feel earned at all. It’s a movie where you watch a great high school football program that won 151 times lose a game and then goes right back to winning.  It’s not like watching the underdogs come up and reach the championship or something like We Are Marshall where something completely terrible happens and the whole community comes together to support the players on the field. It’s just like watching Johnny Manziel not get picked first in the draft. Like am I supposed to feel sad? Really?

In the end I’m just surprised that a sports movie could be this lackluster in every way imaginable. Somewhere it’s like a whole lot of people really liked this true story and tried really hard to make a movie out of it. The saddest part is that to me they totally failed at doing it and I think the real people in this story deserve way better.