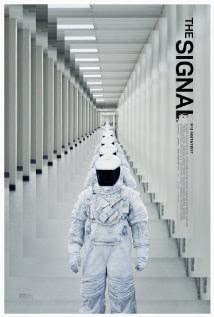 Now I’m going to keep it 100 with you readers here: I went into The Signal not knowing anything about this. I think at most I might’ve seen the trailer when I was sitting in a Landmark theater before seeing Palo Alto. So I’m sitting down thinking, “I’m clearly slipping here on my critic game.” Luckily, going in blind smacked me with such a wondrous surprise. I got to go in knowing nothing about The Signal, a tight 95-minute sci-fi thriller that starts nice slow and builds to a great conclusion.

The story starts with a trio of friends on a road trip. Nick and Jonah are taking Nick’s girlfriend Haley to California, where she is going to Caltech. Along the journey the two, who are hackers that go to MIT, are searching for another hacker going by the handle of Nomad. They are trying to get some payback as Nomad almost got them expelled from MIT. They end up tracking Nomad to a remote place in the middle of the desert and once they search, things go bad quickly, and soon we just see Nick waking up in some government-looking facility in captivity being questioned by a scientist in a protective suit named Damon.

I’m not going to lie here: This film is pretty surprising. The film starts pretty much like a simple relationship drama and then for a short moment went into found-footage territory that got me scared. See, I find those films quite laughably terrible, but then right when you think it’s going in one direction, it completely changes on you again. This is where the film excels: its ability to shift between genre styles yet still keep its science-fiction core.

There are not many actors in this film, so the focus is manly on the four main stars here. Most of the heavy lifting in acting is on Brendon Thwaites as Nick and Laurence Fishburne as Damon. Each scene with the two of them has a great back and forth that at points can remind you of Fishburne’s scenes in the show Hannibal with how much is said with just calm delivery and facial expressions. Beau Knapp does well as essentially the “best friend with quips” Jonah. The script doesn’t overdo it at all. The Haley character is pretty interesting in the beginning of the film, but basically becomes a damsel in distress that left me very cold. I think Olivia Cooke who plays Haley could’ve done more if given the chance.
Overall, William Eubank has directed a pretty great little sci-fi film. It gave me the same feeling the films Moon andChronicle did. Here is something new and original on the screen with fresh faces that didn’t cost the GDP of a small country to make.  I hope all you take the time to find and see this summer-time gem of a film because it’s really worth it.