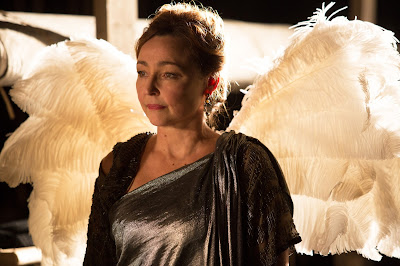 So I watched this French Film Marguerite, written & directed by Xavier Giannoli about a woman who loves singing but isn’t good at it and no one tells her the truth. So now I’m sitting here watching what I think is supposed to be a comedy but for me it’s not at all. To me it’s a very sad little drama about a person’s dreams and how different people are exploiting it for their own gain. Now follow me here, the title character is a married woman who has a rich husband that lets her do whatever she wants to be happy; and that is music and singing. She loves Opera and staging scenes with the help of their butler, Madelbos. She performs to the parties of their circle of rich friends who basically just laugh about her behind her back. Some young hungry upstarts from Paris end up at one of the parties and they latch on to her; a young journalist, his anarchist poet/artist friend and a young woman singer. The journalist and his friend decide to give her a rave review and befriend her in a way to use her to further their own ideas in Paris. There’s a ton more to this film but this is setup of the story.

I was watching this and it just made me think of the art world as a whole as it is now. Even though this film takes place in the 1920s a lot of what it’s saying about creative people with and without talent and how the people around them see and use them hit very close to home. The film did feel long though, there were points that I felt dragged and some moments in character arcs that didn’t’ feel they need to be explored as long and took away from the main character. Even as I have these issues the performances are all great. None of them feel forced or overdone. You lose them in the characters they are portraying on the screen. Catherine Frot who plays Marguerite is great at making a character that you can be annoyed by at one moment and endeared with in another. My other favorite in this is Denis Mpunga who plays the butler Madelbos with this quiet and calm resentment of everyone else besides Marguerite. It’s very interesting to watch seeing this man be so protective of her to the point of harming her in a way by not telling her the truth and letting her live in a lie.

Now should you go and see this film? I’d say yes but it’s also not for everyone. It’s in French so if you don’t like reading subtitles then this isn’t for you. This doesn’t have a simple ending with everything wrapped up in a nice little bow. So if that’s what you like then don’t check it. It’s a little pretentious and if that’s not you don’t check it. And I’d say if you see the genre of comedy next to this film and expect a laugh out loud film then nope it’s not that. What this film is is a good period drama about people living their lives. I’m into that and it’s made really well and it’s totally worth seeing. This is a good film and worth your time.