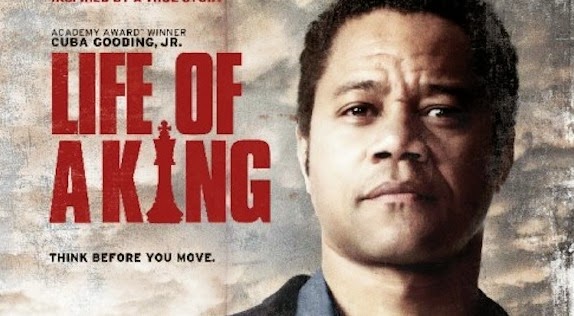 For a few years now I’ve been pretty leery about seeing movies starring Cuba Gooding Jr. since I’ve usually been very let down by them. Life of a King piqued my interest since it’s based on a real story in Washington DC.  This is one of the times that I have been surprised and pleased with what I saw. While it’s another one of those movies about a person going into a school and helping kids that everyone else has forgotten about, it’s well done and in an angle different enough that it’s doesn’t become just a fill in the numbers affair.

Cuba Gooding Jr. portrays a Eugene Brown a man who just served an 18 year prison sentence and is released back into the world. While still inside he befriended a man named Searcy who taught him to change his way of thinking by using chess as a metaphor for life. Eugene, once released, has a hard time finding work until he gets a job as a high school janitor. After some issues with control in detention the principal asks Eugene to take over watching the detention class. To pass the time, and to help the kids avoid the same mistakes he made, he decides to teach them chess. From there it becomes a journey to help the kids how to play the game of chess, and of life. To show them that it’s all about making the right choices to fulfill their potential. All the while he is also trying to fix his relationships with his own estranged children.

Cuba Gooding Jr. gives a great performance as Eugene here. This performance reminds you why he was in so many of those great dramas in the 90s and why he has that Academy Award. He gives a subtle performance as Eugene especially when showing his frustration and caring. The film does what you’d expect it to, but doesn’t make it too saccharine.  Gooding all but carries the film as the other actors, who are decent enough, don’t really grab you amazing. Malcolm Mays, who plays Tahime, is an exception. Mays plays a kid from a bad home who’s on the line between a normal life and a life of crime and boy does he sell the struggle well. Along with Gooding’s Eugene these two characters are the main reason to watch this film.

In terms of negatives of the film Paula Jai Parker, who is usually a fine actress, doesn’t really have much to do here. Her character is just terrible and for no apparent reason. There is no depth on why she acts or continues to treat her son Tahime in the way she does. Richard T. Jones’ character Perry is also poorly handled as a temptation for Eugene to fall back into the life of this bad influence. Also the film is color corrected in a gray and very washed out way. You lose some details in the shots by going that route. It could’ve pushed the values more so that darks and lights didn’t seem so close.

All in all this is a good movie. It’s something decent to see in a month of terrible competition by the film industry as they pat themselves on the back for last fall.  Take some time to go see this in the theater or watch it on VOD you shouldn’t be disappointed.