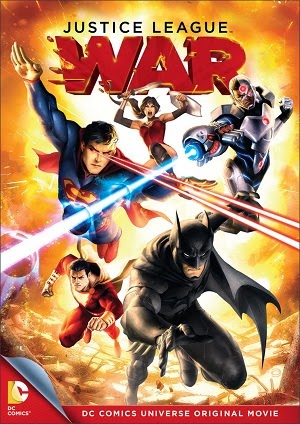 So here we go, since I watch a ton of cartoons and am a known OG comic reader I thought I’d hold the Punch Drunk Critics readers down and watch this Justice League War. Now see it was kind of hard for me to watch this without any bias since I pretty much think the New 52 and the new Origin of Justice League in which this movie is based is full of wacktacularness. That being said I’ve liked most of the DC movies a lot even Flashpoint Paradox so I thought I could be surprised, but sadly I am surprised in the worst way.  Justice League War is so full of wack that I was shocked by the amount as it grew when watching it and then continuing to think about it.

Justice League War is about the first time the major superheroes in the DC universe come together and forms the Justice League.  The story starts us off in Gotham with Green Lantern (Hal Jordan) giving chase to a shadowy figure that just kidnapped a woman of the street. The public and GL included think it’s The Batman since at this point in time Batman is just an urban legend.  GL is proven wrong when Batman comes out and saves the woman; Batman kicks the baddie, plus sons GL in the process. What we get from here in the first half is a buddy-cop relationship like K and J from Men in Black. Please note Hal Jordan is a complete and utter idiot in this version along with being overly arrogant. Batman is basically just Batman here. Their investigation in Gotham leads them to having to meet Superman for the first time in a not so peaceful way.

What we get next is some vignettes of the other characters like Victor Stone playing football while his dad is off studying a device at S.T.A.R. Labs delivered by the Flash; Wonder Woman’s first trip to Washington with Steve Trevor; and the bonus of annoyingly bad Billy Batson being a fan of Stone.  Now here’s the thing: the production on this animated home release is pretty good. The animation is very solid along with pacing and staging of all the scenes. The real problem here is the story and the characterization of the main characters and the antagonist. Bear with even though I’m pretty public with my dislike of the whole post New 52 versions of DC Comics’ characters.
Here’s the thing it’s very hard to like any of the heroes in this story. Wonder Woman’s characterization is pretty sad, she’s mostly like let me smash this and stab that with my sword while screaming. She doesn’t seem heroic, honorable, a messenger of peace or a princess at all. Superman is just a meat-head jock type of guy. He doesn’t seem that inspiring or really threatening other than he can lift stuff and fly. Then we have poor Billy Batson and alter ego that is SHAZAM. He’s like every bad kid in a movie but in the end they never have you like the kid he’s just a little asshole who becomes that little asshole in a grownup body. There are no real arcs for many of these characters.

That being said there are a few good things in this. Barry Allen Flash is pretty likeable; he is just a very true classic interpretation of the character that you can root for in this story.  Another thing that was good is Victor Stone’s arc to becoming Cyborg. We get the whole dynamic with his father and motivations for being in the situation he is in and how he becomes a hero. All of this was in comic version of the story but for me it is handling way better than it was in the original version.  One more thing that I didn’t like is how Darkseid us used and also how violently sensationalistic they are with showing all these battles. I don’t really think it helps anything in telling the story at all but you might just think I’m a fanboy prude.

Now the one thing that really stands out on this release is all the special features. The documentary on the career of Jim Lee (the modern comics GOAT in penciling) was really well done at covering his career and his impact on comics. For serious comic readers a lot of nice tidbits of history of Wildstorm is all through this. The Deconstructing Justice League feature with the director and Jim Lee discussing the comic version and the movie along with what was changed was quite enlightening and interesting. It might not be that fun to watch for those that don’t really care about the making of a cartoon or comic but if you are though man this is the real movie.  Now the last one that is the storyboard comparison to final animation is just pure creative nerd stuff. I loved it but I kind of draw for a living so it’s right up my alley.

So here it is, I don’t just  think Justice League War is not only the worst of these Warner bros animation DC comics home releases to date it’s the worst animated story they’ve done since modern DC superhero cartoon era started with Batman: The Animated Series in 1992. Even though it looks nice everything else is so mishandled that it’s quite confusing. It has you questioning who else is getting involved in their creative process from picking the material to adapt to just constructing the story. Like let’s be honest here, Warner Bros. Animation has been dropping pure hit after hit since 1992 and now this. I hope this is just a minor blip on the timeline and not a foreshadowing of things to come from this continuing partnership.

Oh and Aquaman got played out he didn’t get a shot in the movie.