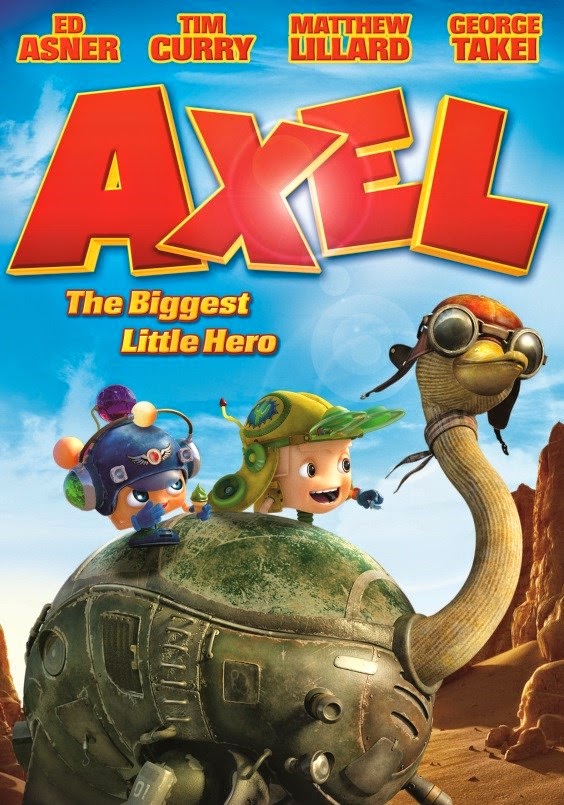 I’m a big cartoon guy, I still watch cartoons on Saturday morning and have my TiVo record all the current series on Cartoon Network. I’m pretty open to watching animated films also. Even though I’m open I’m also pretty critical of them. Now when this new one came to me I was a bit surprised. I’ve never heard of the studio or the movie at all. I was sitting here thinking just who or what is Axel The Biggest Little Hero standing on top of robot bird with sunglasses on. Well, I just popped it in and gave it a watch.

So here we have Axel The Biggest Little Hero as a pretty simple hero adventure story. What’s interesting with this is that it has a very ’80s feel in terms of how completely all over the place the world and characters look, yet it is never explained. The story is about a young boy named Axel who considers himself a hero while the rest of his little town just see a rambunctious nuisance. To be completely honest the whole set up of this story felt very much like the early parts of Naruto (a long-running Japanese anime). One day while Axel was “saving” a small bug on a branch he has a vision of a mystical far away grove of Cacti that could save his people from ever worrying about hunger. He’s told this by the voice of their great hero, Bunta, that he must complete this quest to become a true hero. Being that he fell from that branch and got hurt he then spends the time as he heals up telling everyone what he saw and they all just roll their eyes at his claims. Axel then decides to pack up and go off on this journey into the unknown to find this grove. Following him on this journey is his best friend, Jono.

Honestly, the main thing that’s surprising to me is just how good it looks. There have been some CG films in the last year, some even released in theaters with modeling, character design, lighting, textures and such that are just so bland and subpar, almost like cut-scenes for Playstation 2-era games.  This movie though is quite interesting to look at with what I see as a keen eye for detail, characters, and settings.  The one thing that really holds this back is that the story doesn’t seem to be made for a movie at all. There are parts of the story that are very slow and drags, and feels more suited to an animated series.  Another thing lacking is the big bad villain of the story. While it’s a great visual there isn’t a true foe that is going to try and stop Axel from getting his ultimate prize. Instead, it’s more of a situation Axel falls into while on the journey, and that lacking hurts the story.

In the end , while I think the story will be really interesting for younger kids to watch I feel it’s going to leave everyone wanting. The story in all felt like watching that Clone Wars movie that was just the first three episode of the show. You’ll get to end and feel like “That’s it? But where’s my ending”? Who knows if we’ll ever get it? It might just end up being something you can put on to keep the kids quiet for an hour.