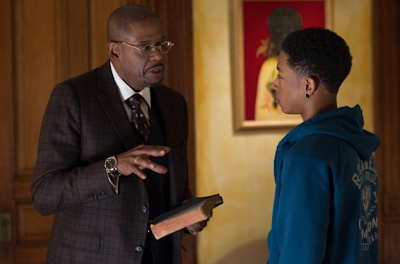 With the holiday season now in full effect, we’re getting a barrage of holiday film after holiday film. One of the latest is from director and writer Kasi Lemmons, who brings us an updated adaptation of Langston Hughes’ play “Black Nativity,” starring Jacob Latimore, Forest Whitaker, Angela Bassett and Jennifer Hudson.  A movie with a lack of subtlety and well-crafted-but-jarring musical numbers is here and offering a different take on Hughes’ 1961 tale.

The story begins with Langston (Latimore), a 15-year-old who with his single mother Naima (Hudson) lives in a fairly poor area of Baltimore. When he and his mother are evicted from their home, she decides to send him to his grandparents’ house in Harlem for the Christmas holiday until she can figure things out. Once there, he meets his grandparents for the first time, since his mother is estranged from them because of some disagreement in the past. It’s hard for Langston to get adjusted to being in New York and living with his grandfather, a famous preacher (Whitaker) in the city and his loving grandmother (Bassett), who tries to no avail to give him everything he would need to adjust and have a good holiday. Everything is leading to the performance of “Black Nativity” planned at his grandfather’s church where Langston’s grandfather has a performance of the Black Nativity play for everyone in the community.

It’s really hard to figure out the character of Langston in this story. Throughout it he’s so focused on his mother and her troubles that he takes no real time to get to know his grandparents at all. It’s all complaining and whining. Latimore does have a good singing voice though, something I can’t really say the same for Whitaker and Bassett but I like that it is them instead of having them not sing at all. Jennifer Hudson is as always amazing in each singing performance in the film and really shines, which she has to since she really isn’t given much to do acting-wise.

The movie really isn’t that long and goes by pretty quickly. That becomes a problem since every time you start to get interested in the plot of the story out of nowhere there is a song. While you’re thinking  of course a musical has songs it’s in how it’s handled and how the moments of story and character development flow in and out of those songs. This movie did not do that well. Still Raphael Saadiq should be commended on production of the music throughout the picture. The soundtrack felt current and not annoying to sit though.

To wrap up, Black Nativity isn’t the best holiday film we have this season and probably won’t clean up at the cinema because in the end it’s just a quite average movie.  The best things about it are the songs and you can get the soundtrack and listen to those without seeing the movie. Black Nativity has all the best intentions in the world but really didn’t follow through on any of them.